The Birth of the United States Army Airborne

The history of United States Airborne Forces did not begin on the training fields of Fort Benning, Georgia, as some believe. In fact, the origin of Airborne Forces in the U.S. military began with a familiar name to American military history, Brigadier General William L. "Billy" Mitchell (1879-1936).

As well as being considered the spiritual father of the United States Air Force, which he advocated for fiercely during his tenure in the military, BG Mitchell was the first to imagine airborne tactics and sought the creation of U.S. Airborne Forces.

It is not recorded exactly when he organized a demonstration of Airborne Infantry for U.S., Russian and German observers. However, according to records at Ft. Benning, Georgia, it is confirmed that BG Mitchell held the demonstration "shortly after World War I" at Kelly Field, in San Antonio, Texas. During the demonstration, six soldiers parachuted from a Martin Bomber. After landing safely, the soldiers assembled their weapons and were ready for action in less than three minutes after they exited the aircraft. 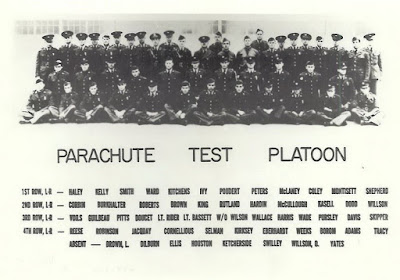 It was actually the Soviet Union that created the first airborne unit, which it used for the first time in August, 1930, when it held maneuvers at Veronezh, Russia. The display was reportedly so impressive that it was repeated about a month later in Moscow.

Meanwhile, the Germans developed airborne forces in their military and, at the outset of World War II, used paratroopers to spearhead Nazi invasions throughout Europe. Back in the United States, the concept of airborne soldiers languished until the War Department was informed of the success of German paratroopers in Nazi invasions. 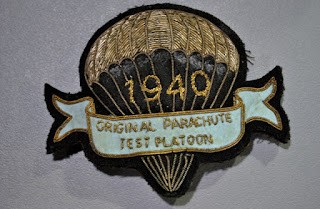 Just how the United States would implement the airborne concept was an issue in Washington DC also.  Though it was ultimately discarded, some of the leaders in U.S. Air Power offered a suggestion that Airborne Infantry should be called "Airborne Grenadiers" and create a new service called the "Marines Air Corps."

Finally, in April, 1940, the War Department approved the formation of an Airborne Test Platoon for infantrymen. The War Department approval gave permission to "...form, equip and train under the direction and control of the Army's Infantry Board. So, in June, the names of 40 men were selected from a pool of 200 volunteers from Ft. Benning's 29th Infantry Regiment and the Test Platoon was born.

Later in 1940, the 2nd Infantry Division was given the mission to conduct necessary tests to develop reference material and operational procedures for "air-transported personnel."

When training first began for the Test Platoon, it still wasn't on the hallowed training fields of Ft. Benning, though. LTC William C. Lee was a staff officer for the Chief of Infantry at the time. He recommended the platoon be moved to the Safe Parachute Company, of Hightstown, New Jersey, for training on the parachute drop towers there. They had previously been used during a World's Fair held in New York.

At Hightstown, training with the towers worked out so well that the Army bought two of them immediately. A short time after that, they bought two more.

The platoon returned to Ft. Benning and began training in earnest, especially in developing Parachute Landing Falls. As well as jumping from atop physical training platforms, those early paratroopers also practiced PLFs from jumping out the back of moving 2-1/2 ton trucks, to simulate the shock of landing.

In less than 45 days, the Test Platoon was ready to begin airborne operations. The first-ever official parachute jumps by members of the U.S. Army took place on August 16, 1940, when 1LT William T. Ryder, the platoon leader for the test platoon, and Private Will N. "Red" King jumped from a Douglas B-18 over Lawson Army Airfield, at Ft. Benning. On August 29th, the entire platoon conducted a mass jump. 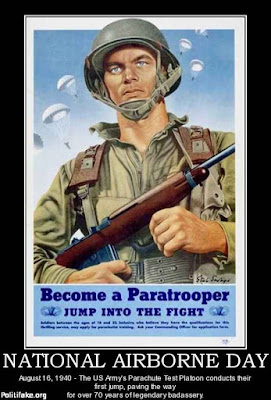 Following the successful Test Platoon jumps, the 501st Parachute Battalion was officially formed. It was commanded by Major William M. Miley, who went on to later command the 17th Airborne Division during World War II. The Test Platoon soldiers then became the cadre for the new outfit.

While still a fledgling unit, the 501st adopted the slogan "Geronimo!" after Private Aubrey Eberhart started yelling it out when he jumped, to prove to his fellow soldiers that he had his faculties together when he exited the door of the aircraft.

Though Airborne Forces would have to be used for a wide array of missions throughout the globe, it was decided that Ft. Benning would become the centralized training facility for all servicemen to be trained for airborne duties. This was made official on May 15, 1942, when The Airborne School was christened. Through the years, the name of the school has changed several times, from The Airborne School to The Airborne Department, then the Airborne-Air Mobility Department, and then to the 507th Parachute Infantry of the School Brigade to the 1st Battalion of the 507th Infantry, among others. However, regardless of the name, the mission then was the same as the mission today -- to prepare military personnel for airborne operations.