When LTC Leonard B. Scott strode out to the microphone, he looked less like a veteran Army officer than he did a Hollywood star.

LTC Scott looked the same way Airborne commanders might be envisioned on the silver screen, and he had a distinctive style: mirrored shades, insanely polished jump boots, a uniform that was more starched than possibly any other on the whole fort and his inevitable cigar.

LTC Scott's Combat Infantryman's Bade, Jumpmaster wings, Pathfinder badge, Ranger tab above his "Follow Me" patch on his left shoulder and his swagger made it clear he was the boss here. Maybe he was a benevolent dictator, but he was absolutely the man.

I was standing on the bleachers like the rest of my Airborne School class at Ft. Benning, Georgia in 1986. We were waiting for LTC Scott to allow us to sit and then listen to his 'welcome speech' for us at the beginning of Ground Week at the school. 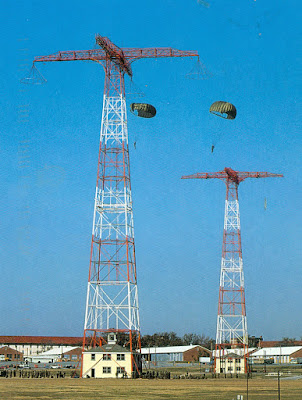 Airborne School was a part of the Infantry Training School when I attended. The school included several other schools within it, such as enlisted and officer skill qualification courses in the Infantry career field, Ranger School and the Ranger Indoctrination Program, among others.

Airborne School was broken into three distinct weeks: Ground, Tower and Jump weeks. Service members from not only the Army, but also the Navy, Air Force and Marines attended the course. And everyone, enlisted and officer alike, was treated nearly the same.

LTC Scott stood behind the microphone and scanned his new Airborne candidates through his mirrored shades. Then, he whipped the glasses off and started with, "Welcome soldiers, sailors, airmen and Marines to Airborne School. My name is LTC Leonard B. Scott and I will be your commanding officer for the remainder of your stay here with us."

The commander stated that, regardless of the service one was in, the fact of airborne soldiers being part of any branch's elite was undeniable. He explained that, as a 22-year-old second lieutenant in a Ranger company during the Vietnam War he saw the brotherhood that was the backbone of Airborne forces on full display. 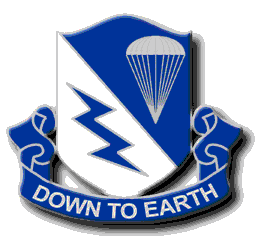 "I came to the conclusion very quickly that it would be impossible to serve on a Ranger team without there being a strong sense of brotherhood. But, in fact, it is hard to serve in any unit without brotherhood being a big part of it. So, if there isn't that sense of brotherhood from the top, then start it from the bottom. Whatever you do, though, you make that Job No. 1. Because you watching your buddy's back, and him watching yours is the whole damn reason any of us are here!" he said.

LTC Scott spoke like a tough-minded teacher and made a lot of sense. After covering the need for dedication in life, he discussed exactly what that meant to him. The commander said soldiers tend to fall out of running formations when they do not know how far they are going to go. Yet, with a firm understanding of exactly how far they are going, a soldier who might otherwise drop out may well stay in a running formation.

LTC Scott said it is sometimes impossible to know how far you must run, either physically or in life. "And, that is why in the Airborne we greet each other with 'How far!?' and respond with, 'All the Way!' " he said. "We will run as far as this life makes us, and when we are done running, and if something needs its ass kicked...we're the ones to do it." 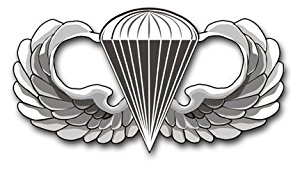 Powerful words. He was compelling.

Then he got quiet and came from around the microphone and said loudly, "Do any of you know the secret to life!? Any of you!?" Well...no...we didn't. We hadn't even put together the meaning of lunch yet.

'That would be good to know,' I thought.

So, with his finger he indicated the Airborne trainees should come forward and join him. Everyone. He was the boss...so, whatever. 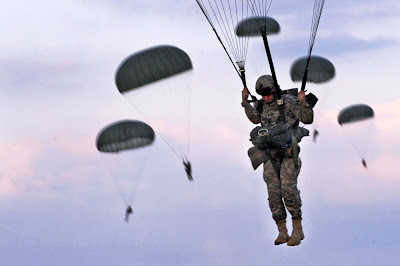 He explained, "You are each going to be caught in shit someday that you cannot get out of. You will have to stand or fight, somehow or the other. And, when that day comes...all you have to do is act brave. You can be as terrified as you like inside...but you act brave in the face of what would frighten you and I guarantee you that you will one day stop acting brave and that will be a part of who you are."

Then he said, "And stay up, if the Army send you to some god-forsaken part of the world, and there are quite a few places like that, don't say, 'I hate this!' Tell everyone you love it there. Tell yourself that this is the greatest place you have ever been and you would rather be here than anywhere on the face of the earth." 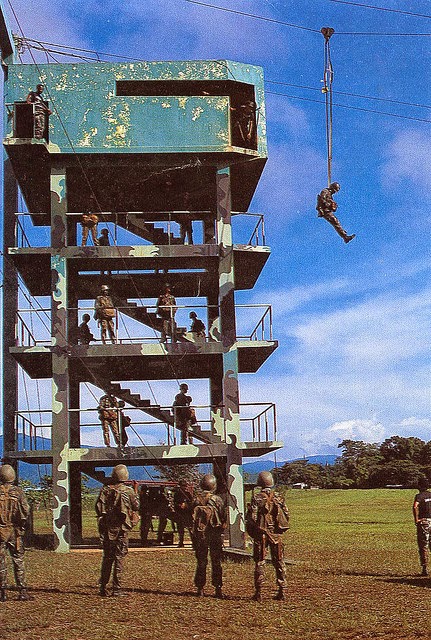 There was a dramatic pause and then he added, "LIE TO YOURSELF ALWAYS about when the going gets tough! Lie like a damn rug to yourself. That shit chow you are eating isn't shit chow -- it's the best T-bone you ever ate. Visualize it. Because in the Airborne and in life, there is no room for being defeatist. The enemy is everywhere, and very frequently you will be cut off, alone and facing great odds. And, in life and especially the Airborne...your job is to beat down the bad guys. We are the good guys, if you haven't put that together yet. We come out of the sky when some murderous tyrant takes his shot and oppresses good people and we destroy that person and their armies! We save people in times and places where we might be lucky to save just ourselves! Every single Airborne soldier from Private to General is charged with one thing: No matter how hard the going gets -- 'Charlie Mike': Continue Mission!"

He concluded, "Now, I am going to stop this little speech by asking one thing and one thing only: HOW FAR!?"

Like thunder, the Airborne trainees barked in unison, "ALL THE WAY, SIR!"

He smiled. Put on his shades and walked away, instructing the training sergeants (called "Black Hats") to "get these people back in training."

If there was water anywhere on the ground I was sure he would have walked calmly atop it back to his waiting vehicle.

I learned later that LTC Scott wrote a book called "CHARLIE MIKE!" about his experiences as a young lieutenant in a Ranger team in Vietnam. Even later I learned that it sold a lot of copies. To this day I have not yet read it. But, I remembered what LTC Scott said and, in lieu of biblical Proverbs, I still use what he has to say.

If anyone ever needed a sea parted, I think that just might have been in his wheelhouse too.

UPDATE: According to Google, Leonard B. Scott retired from the U.S. Army in 1994 as a full colonel. He authored not only "Charlie Mike," but also "The Last Run," "The Hill," "The Expendables," "The Men of Iron" and "Forged in Honor." Col. Scott served 27 years in the United States Army. Among the colonel's decorations are the Silver Star and Purple Heart. He and his wife reportedly retired to their home in Oklahoma. Best of luck and God bless, sir.
Posted by Downtowner at 8:58 AM

This site does not make money and it never will. No one will attempt to sell anything on this site.

I have standards here and would not put up anything that is not family friendly. This is a smut- and bad language-free zone. In addition, this site takes no partisan stand on any political issue. No propaganda is allowed here from any politician, political body or cause.