For students of military history and U.S. paratroopers from every era during the past six decades, he is one of the most compelling figures of World War II: Major General James M. "Jumpin' Jim" Gavin, third commander of the U.S. Army's  82nd Airborne Division during World War II (1941-1945).

Before he would retire from the Army, after the war, in 1958, he would garner yet another star on his shoulder, as a lieutenant general and commander of the U.S. Army Research and Development Command.

Yet, it is as a fighting general that MG Gavin is most remembered. MG Gavin was the youngest major general to command a division during World War II, being only 37 years old at the time of his promotion. Similarly, after the war, LTG Gavin became the youngest lieutenant general promoted to that rank, in March, 1955. M1 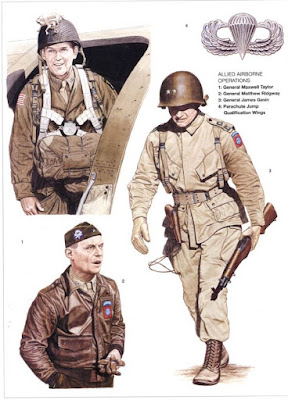 During combat operations in North Africa, Sicily and Europe, MG Gavin was well-known by his preference to carry an M1 Garand, a weapon normally used by enlisted Infantrymen, instead of either an M1 Carbine or M1911, .45 Caliber pistol, preferred by most officers.

MG Gavin's nickname was not just something made up one day. Rather, the "Jumping General" took part in all four combat jumps during World War II that the 82nd Airborne Division was involved with.  For the officers under his command, MG Gavin made it clear he intended they be "... the first one's out the door [during airborne drops] and the last ones on the chow line." So loved by many of his soldier's in the 82nd Airborne, decades later many veterans simply referred to the general as "The Boss."

Who knew that MG Gavin would travel so far in the world, given the humble circumstance of his birth.

MG Gavin was born in Brooklyn, New York on March 22, 1907 to Irish-American parents, Katherine Ryan and James Nally. On his birth certificate, he was given the name "James Nally Ryan." However, by the age of 2, the future airborne commander was given up for adoption and placed in the Covenant of Mercy Orphanage, in Brooklyn, where he remain until he was adopted, in 1909. The future war leader of the famed 82nd was adopted by a Pennsylvania coal miner and his wife, Martin and Mary Gavin, of Mount Carmel. Consequently, "James Nally Ryan" was re-christened "James Maurice Gavin."

Despite the fact that his father was employed full-time, the Gavin family just barely got by, which promoted young James Gavin to quit school in the 8th Grade to become a full-time clerk at a shoe store for $12.50 per week. However, on the day of his 17th birthday, James Gavin took the night train to New York City. Once there, he sent word to his parents that he was well, so they would not be concerned about him. Then, he took the first steps in a military career that would span more than 30 years and three continents.

Young James Gavin went to an Army recruiter to join-up. However, being only 17, the recruiter brought him before a local lawyer, followed by the young Gavin being sworn in on April 1, 1924 as a private in the U.S. Army. Then-Private Gavin was not sent to Basic Training. Rather, in the Army of the 1920s, Basic Training was performed at the unit. In PVT Gavin's case, the unit was a 155mm battalion that served as coastal artillery at Ft. Sherman, Panama. He did well there and served as a crewman on a 155mm battery.

Once in Panama, PVT Gavin attended a local Army school to complete his education. At the Army school, the top graduates were given a chance -- only a chance -- to attend the United States Military Academy, in West Point, New York. It was stipulated that such graduates would be given the opportunity to be admitted to West Point only if they did well on the academy's entrance examination. 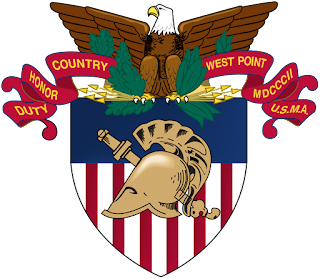 Well, in the Summer of 1925, Cadet James M. Gavin was entered into the freshman roll at West Point. Subsequently, as a graduating cadet in 1929, it was mentioned in the West Point yearbook, "Howitzer," that Cadet Gavin was an accomplished athlete, a boxer, and was "already a soldier" when he arrived to the Cadet Corps.

Upon graduating, in June, 1929, then 2nd Lieutenant Gavin married the former Irma Baulsir, on Sept. 5, 1929. This would be the first of two marriages for the future general. After divorcing his wife, Irma, then-MG Gavin married his second wife, the former Jean Emert Duncan, in July, 1948. 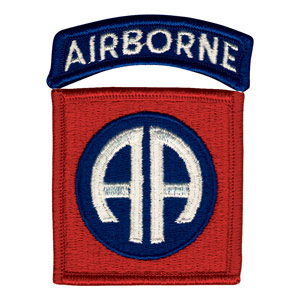 Following combat in World War II in North Africa, Sicily and France, Col. Gavin was promoted to the rank of major general and became commander of the 82nd Airborne on Aug. 8, 1944, directly before Operation Market-Garden, which took place in Holland.

After the war ended, in 1945, LTG Gavin, an adversary of segregation, played a key role in the incorporation of an all-black battalion in the 82nd Airborne, the 555th Parachute Infantry Battalion. Col. Bradley Biggs, first commander of the battalion, referred to LTG Gavin as "one of the most color-blind Army officers in the entire service."

In addition, LTG Gavin called for the use of mechanized troops being transported by air to become modern cavalry. By March, 1958, though, LTG Gavin retired from the Army and wrote the book "War and Peace in the Space Age," which was also published in 1958.

Later, the famed commander of the 82nd Airborne served as a technical adviser for the Hollywood films "The Longest Day" and "A Bridge Too Far."

LTG James M. Gavin died on Feb. 23, 1990 and was laid to rest in the Old Chapel at the United States Military Academy, and buried at the USMA Post Cemetery at West Point. He is survived by his widow, Jean, and five daughters, 10 grandchildren and 3 great-grandchildren.

Posted by Downtowner at 5:17 PM