The Confederate States of America's chances of winning the Civil War diminished substantially after July 3, 1863. It was then that the Army of Northern Virginia, commanded by Gen. Robert E. Lee, retreated southward after a devastating loss at the hands of Major General George G. Meade's Army of the Potomac at Gettysburg, Pennsylvania.

By the time that the camp was liberated, in May 1865, it had earned a reputation as a notoriously dangerous place for Union prisoners.

The distinct possibility that their cause might be lost did not deter the CSA's leadership from opening up an enemy prisoner of war camp, near Andersonville, Georgia, named Camp Sumter, also known as the infanous Andersonville Prison, in February 1864.

During the war, Camp Sumter held 45,000 Union Army prisoners of war. At the time of its liberation, prisoner deaths totaled 13,000. This occurred, in large part, due to unsanitary living conditions, scurvy, diarrhea, dysentery and starvation. Some prisoners were chained, starved, beaten, clubbed or outright shot.

The one and only commanding officer of the camp was Capt. Henry Wirz, who was executed for war crimes at the conclusion of the war.

Posted by Downtowner at 9:13 PM No comments:

The U.S. Military Has Always Been Most-Trusted Arm of Government

No one believes in Government 100 percent anymore. Some people used to. Most don't believe in the Church anymore. There is a lack of confidence in the Executive, Legislative...even the Judicial branches. They lack credibility in the minds of many. Credibility is the ability to believe what someone says, and maybe the last thing...the very last thing that Americans believe in is the uniformed, military services. 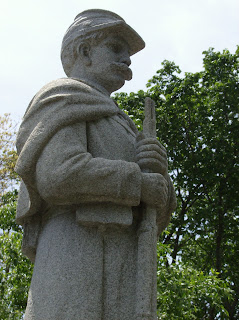 The Army, Navy, Air Force, Marines and Coast Guard, and their Reserve and National Guard components, still have the confidence of many, many Americans. Myself among them. And, that credibility the military enjoys is built upon the granite foundation that those services, including their leaders at all levels, are devoid of political partisanship, graft, deceit or poor judgement. Thank God for this, because there is something people can believe in, after all.

A Coast Guard lieutenant was arrested recently on charges of being a domestic terrorist, who espoused white nationalism. Thank God he didn't kill anyone. There was an incident years back when another captain, a Muslim health care professional in the Army, murdered several military members for the sake of "Jihad," the Arab version of 'Holy War.' These things shake the confidence of people, especially given the fact that both of the instances I brough up involved commissioned officers.

I was a soldier for many years (Active and Reserve). I was a non-commissioned officer (a sergeant) and during my tenure I served in the Infantry and Intelligence branches, respectively.  My Dad and uncles were in World War II. My cousins served in Vietnam. So, i know something of what I am talking about.

Service in the military is a job and a public expression of belief in one's government. The military defends the rights of people to have the liberties they enjoy in the United States. However, the military does not participate in those liberties fully -- and they do this voluntarily by signing a contract with the respective services. In that contract, it is made clear that they will execute the orers of those appointed over them. In fact, every member of the military not only signs a contract about this but they also swear an oath to that effect.

The military does not operate as a democracy. It is a constitutional oligarchy, elites (officers and senior NCOs) run it based on rank. Its administration and healthcare is an example of functional communism. There are people who do not like those words, but that doesn't change facts. The military serves at the behest of the civilian government, and anything else would make our military a part of the problem.

Yet, inasmuch as the military serves the civilian government, it cannot be a part of the partisan dickerings that surround the civilian government. Why? Well, Republicans and Democrats may get elected to office and high office, but they are not above corruption, the failure of logic or pettiness. And, if the military becomes any of those things then we all lose this country. We lose it all.

Since this republic, our Great Experiment in democracy, began we have had good executive leaders (presidents) and we have had bad ones. Yet, the republic goes on because the most powerful elected person in this country cannot be a dictator -- cannot become a king. Why? Because the Founders of this nation created a government with a series of formal checks and balances. The military has no place in government, other than to fulfill its narrow, necessary duties. If any of that ever changed, the United States would be no better than the Third World tyrannies that litter this world like so much refuse.


Why is All This Important?

A lot of good people haave died since 1775 to make sure that neither conservatives or liberals or whomever else ran this country as they exclusively saw fit. The media was created in the United States to be another, more informal means of check-and-balance against governmental corruption and abuse. So, once the media is taken out of the picture -- well -- the picture isn't that clear from the outside now, is it?

If the three branches of Government cannot be trusted, if the Church cannot be trusted by many, if the media cannot be trusted...then the military is the only clean thing left in this country. And, soldiers, sailors, airmen, Marines and Coast Guardsmen are the only ones who can keep it that way, by doing nothing more than fulfilling their oathes, written and spoken, and being a part of the solution and not adding to the problems in this nation.

(Jim Purcell is a former weekly newspaper publisher in New Jersey. He previously served in the U.S. Army and received his graduate degree from the New York Theological Seminary, in New York. He is retired and currently resides in Western North Carolina with his wife.)

Posted by Downtowner at 1:32 PM No comments:

Posted by Downtowner at 4:13 PM No comments:

Posted by Downtowner at 12:59 PM No comments:

Posted by Downtowner at 11:08 PM No comments:

Posted by Downtowner at 5:00 AM No comments:

Posted by Downtowner at 2:36 PM No comments:

Posted by Downtowner at 7:43 PM No comments: