'The Majestic' and it's message to me about service

I just got done watching one of my favorite movies, called "The Majestic" from 2001, starring Jim Carrey. It is one of Carrey's little-known works. And, it was panned by many critics at the time. But, it struck a chord with me, then and now. 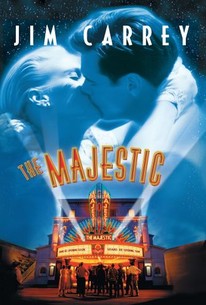 It is not so much that the story had compelling narrative or acting in it, no disrespect to Mr. Carrey (who rendered a wonderful performance in my book). It was the subject matter of the story. In "The Majestic," Carrey portrayed a Hollywood writer who loses his memory after a car accident and washes up in a California town a decade after World War II concluded. The town sacrificed 17 of her sons during the war, and he is mistaken for one of those lost, a "Mr. Luke Trimble." The story unfolds that Carrey's character eventually remembers who he is and testifies before the House Committee on Un-American Activities during the McCarthy Era.

What struck me about this show was the way "Luke Trimble's" father, his friends and his old love received back one who was thought lost to death. This is what struck me.

I have a brother, David, who was named for U.S. Navy Gunner's Mate 2nd Class David A. Purcell, 19, killed by enemy forces during the Anzio-Nettuno landings on January 26, 1944. Like the character in "The Majestic," my father's brother was originally declared missing. I would come to learn through my early youth that David's death devastated my Dad's family: his mother, Grace; brother, Charlie; and sisters, Marie and Susan. I know Dad never got over it, not the rest of his life.

He could not mention his brother without tears coming to his eyes, even into his 70s. So, what I learned about my uncle was learned from my aunts and their husbands during family get-togethers during Thanksgiving and Christmas. And, when they confided these things to me it was always out of ear shot from my Dad, who would go skulking to his bedroom if he heard it.

By all accounts, David was a lively boy, full of practical jokes and laughing. I was told he took very little seriously and loved his family, especially idolizing his older brother, my Dad. David loved his Mom, his family, girls, dances and sports.

My Dad being a soldier in the New Jersey Army National Guard at the outbreak of the war, he was among the first to be federalized and go off to war, leaving behind his family, and especially his kid brother. One of my aunts later told me that David was the "heart" of the family, and that when he died it was like that heart stopped with him.

When I see "The Majestic," it's like looking into a mirror of what it might have been like if my late uncle had come back after being reported missing. There would have been broken hearts mended, a broken family healed, and my broken father unbroken. Of course, my grandmother Grace, I am told, put on a brave face. But, she was a woman of great love and emotion, and I cannot imagine what she went through with the passing of her youngest. Now, what if he never died? What if he had come back, whole and healthy? How was history changed by the death of this strong, delightful young man?

I tear-up when I see "The Majestic" every time, I admit. My uncle died many years before I was born, but I noticed his loss even in my life growing up...like something that was supposed to be there was gone.

World War II was a fight that had to be fought for the very freedom of our nation and world. And, those that died during that great struggle should always be remembered, as anyone who laid down their lives for this nation should.

But, I ask this: If one truly wished to support our soldiers, sailors, airmen and marines, and their families, would not the thing to do be only fighting wars that were necessary for our nation's freedom from attack, and getting these terrible wars over with as expeditiously as possible? I do not believe that supporting wars for their own sake is not supporting anyone, most especially those who have to perish in them and those they leave behind.
Posted by Downtowner at 3:29 PM No comments:

Posted by Downtowner at 7:00 PM No comments:

Posted by Downtowner at 10:29 AM No comments:

Posted by Downtowner at 9:45 AM No comments:

Posted by Downtowner at 8:11 AM No comments:

Posted by Downtowner at 12:49 PM No comments:

Posted by Downtowner at 11:35 AM No comments:

Posted by Downtowner at 11:26 AM No comments: