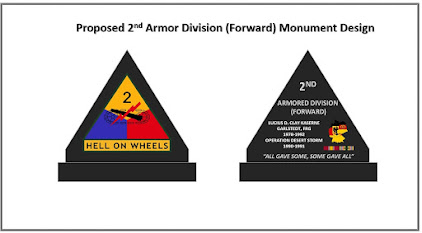 The 2nd Armored Division (Forward) was originally sent to Germany during the Carter Presidency, in 1976. Once there, the Division (Forward) would serve under British leadership from Germany’s Northern Army Group. During its tenure in Germany, like so many units, its ongoing mission was to discourage the Soviets from attacking Germany and to fight and beat them if they did.

In 1990, the 2nd Armored Division (Forward) was among those units that deployed for Desert Shield, later Desert Storm and the Liberation of Kuwait. Some of those brothers and sisters in the Division (Forward) family were injured, and some paid the ultimate price for the American victory.

Finally, the 2nd Armored Division (Forward) was deactivated at Fort Hood, Texas, ending an era of honorable service to its nation.

Even though the 2nd Armored Division’s colors have been struck and are now retired from service, the 2nd armored Division (Forward) family of soldiers and family members are seeking the monument to remind today’s soldiers, and today’s Army, of those who came before and did every job they were assigned to, regardless of cost to its soldiers and officers.

Consequently, the 2nd Armored Division (Forward) Monument Committee, which assembled about nine months ago, is seeking to complete its fundraising drive to emplace its marker at Fort Hood. There are three initial organizers of the committee, who served at the Division (Forward): LTC Paul Dulchinos (Ret.); a former officer at the 17th Armored Engineers Regiment; and former NCOs Ken Tabony and Jim Purcell, who both served in the 41st Infantry Regiment.

Please go to the Facebook page “The 2nd Armored Division (Fwd) Memorial Project,” or go to https://2adfwd.org/ for more information. The monument project has a special, one-of-a-kind commemorative coin that supporters can also purchase there for $25.00 per coin. Should anyone wish to purchase the coin or to donate to the project, they can do so at https://2adfwd.org/.

Posted by Downtowner at 4:07 PM No comments: