The Army Was Well-Served By Specialist Ranks

The Army's lack of true specialty ranks goes back to the mid-1980s. It was then that the last of the soldiers who held the rank of specialist fifth class were converted to the rank of sergeant. At the time, I was a going through the Intelligence Analyst Course (Class 96B10-16) at the U.S. Army Intelligence Center and Schools, in Fort Huachuca, Arizona. Two of the students in the class were converted from SP5 to SGT (E-5). 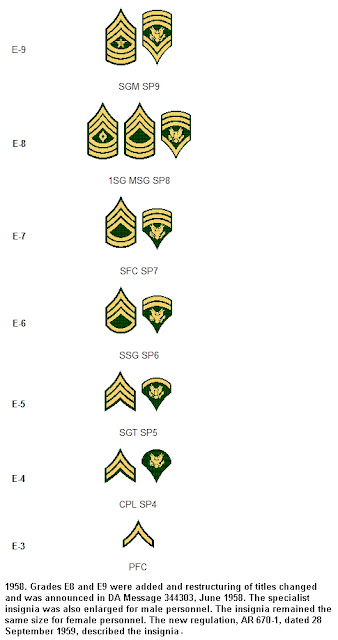 In my opinion, it was a mistake to wipe out an entire class of ranks, which gave good service to the Army. Does every enlisted military occupational specialty need leadership associated with its duty description? Well, certainly the combat arms and close combat support jobs do. However, where it involves logistical, intelligence, driving, aviation, personnel, food service, finance, administrative and medical military occupations, as an example, I think specialist ranks would serve the Army well again.


SPECIALISTS KEEP
THE TRAINS ON TIME

The Army is not the Marines, where "every Marine is an infantryman, regardless of their job." The Army has a larger mission strategically. Its specialties are necessary would be better served by additional technical schools throughout soldier careers, as opposed to traditional leadership academies.

Should a finance sergeant first class (E-7) have tactical oversight of an infantry corporal (E-4)? I don't believe so. Though, I have spoken to fellow veterans who served in this era, in the recent war in Afghanistan, and I've been told that  soldiers are sent on direct combat missions immaterial of their branch or training...if true a bad practice. Specialists could, as they had been from 1902-1986 (or so) the soldiers who keep the trains running, the force paid, and the immense administration of the Army running while combat units and combat soldiers perform the vital function of fighting America's enemies.

Whatever the Army does should be done well. Specializing soldiers again (specialist grades E4-E9) would focus many vital functions without superfluous training or assignments. A drill sergeant should come from the combat arms, ideally. Any NCO position involving tactical prowess should have candidates come from the combat arms. Meanwhile, a valued intelligence professional should be able to gain advancement even if they are not fluent in infantry leadership methodology. While every soldier should know how to shoot, move and communicate...not every soldier needs to learn how to run a fire team or an infantry platoon.

THE ORIGIN OF SPECIALISTS

Specialist ranks have their origin in the U.S. Army dating back to 1902, with the creation of the rank of technical sergeant.

There was an overhaul of the rank structure in 1920 and the rank of "private/specialist" was created. Soldiers who qualified for this rank attended six classes and were paid the same as privates first class. However, this rank represented competence in certain tasks and did not convey any leadership abilities with it.

Also during 1958, the specialist fourth class rating was assigned to those in pay grade E-4, which became the beginning step in a rank structure that concluded with the pay grade specialist 9, which was the pay equivalent of (E-9), or command sergeant major.

Only the lowest specialist grade survives today after the more senior specialist grades were gradually phased out, concluding during the mid-1980s. During the late 1980s, specialists fourth class were converted to just "specialists," and remains so today. The force-wide prevalence of this pay grade led to the humorous characterization of the "E-4 specialist mafia."

Was abolishing an entire class of specialist ratings a good idea? Feelings are mixed. Personally, I believe that specialized career fields would be well-served by a specialist rank structure. Good, competent specialists of certain jobs in the Army should be able to excel within the confines of their military occupational specialty from E-4 through E-9, without the expectation of leadership responsibilities.

Everyone in the Army should know how to protect themselves and possess basic soldier skills. But, not everyone was born to lead in squads, platoons, companies or battalions.

(Jim Purcell is a former U.S. Army sergeant, who left the service and became a journalist for many years. He graduated with a Master's Degree from N.Y. Theological Seminary and retired to Western North Carolina with his wife, Lita.)
Posted by Downtowner at 11:55 AM