Actor Jimmy Stewart (1908-1997) is perhaps best-remembered by movie fans for the 1946 Christmas blockbuster classic  “It’s a Wonderful Life,” wherein he portrayed small-town banker George Bailey. While it is true that during his amazing acting career, which spanned 1935-1991, Stewart was a perennial A-list talent who was featured in more than 90 films, television programs and shorts, many do not know that he was also a U.S. Army Air Corps pilot during World War II.


In addition, by the end of his long U.S. Air Force Reserve career following the war, which concluded with his retirement in 1968, Stewart had garnered the rank of brigadier general. And, in 1985, former President Ronald Reagan officially placed Stewart on the retired list of major generals from the U.S. Air Force, promoting him one last time.

Though Stewart was a Princeton University graduate, his first choice for college had been the United States Naval Academy. However, the famous actor’s father, Alexander Maitland Stewart, talked him out of attending the service academy. Perhaps Stewart’s father discouraged his son because he was a veteran of not only the Spanish-American War but also World War I.

As Stewart’s acting career began, in 1935, he took time out of his schedule to earn his private pilot certificate. Three years later, in 1938, Stewart obtained his commercial pilot’s license. Two years before the Japanese attack on Pearl Harbor, in December, 1941, Stewart already had more than 400 hours of flying time.

In fact, by 1939, Stewart and musician/composer/aviation enthusiast Hoagie Carmichael invested in Thunderbird Field, a pilot training school that was operated by Southwest Airlines, in Glendale, Arizona. With the advent of World War II, though, Thunderbird Field became a training facility for the U.S. Army Air Forces, which trained more than 10,000 pilots during the conflict.

Stewart was drafted into the Army in October, 1940. However, he was judged to be underweight for his 6’3” frame by 5 pounds. Determined to serve, Stewart beefed up and made the 143 lbs in weight required for enlisting into the military service. Though he was initially a private in the Army, Stewart applied to become a pilot in the U.S. Army Air Force, given that he was not only a college graduate but also a very experienced pilot.

Even though, at 33 years old, Stewart was six years older than guidelines for the Aviation Cadet Program in the Air Corps, he was nevertheless commissioned as a second lieutenant on January 1, 1942, making him the first of Hollywood’s elite to put on a uniform following the attack on Pearl.

Initially, Stewart was rated as a service pilot, which meant that he piloted flying transports overseas. However, he soon tested and a military board granted him the ability to fly combat aircraft for the Air Corps. 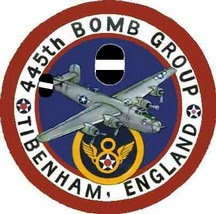 Early in the war, many celebrities from the world of film and sports joined the military services and, often, essentially became recruiting and public relations assets for the government. However, this is not what Stewart wanted. At first, it looked like he would never get his wish of flying in combat. Yet, his first assignments in the Air Corps were far from the battlefield.

Stewart was promoted to first lieutenant in July, 1942 and assigned to Kirkland Army Airfield, in New Mexico, where he trained at the bombardier school. However, he was eventually sent to Gowen Field, in Idaho, where he was given instructor duty. Still, in July, 1943 the Hollywood star was promoted to the rank of captain. He was far from combat duty, though, and he remained eager to fly combat missions in the war.

Frustrated in his combat ambitions, Stewart made his case to his superior officer, LTC Walter E. Arnold, who at last granted the new captain’s wish. Consequently, Stewart was ordered to join the 445th Bombardment Group, which was equipped with B-24 Liberators, as the unit completed final training at Sioux City Army Air Base, in Iowa.

By August, 1943, Stewart was slotted as the operations officer for the 703rd Bombardment Squadron, within the group. By October that year, the 445th was estimated as ready for action. So, after completing a long list of training tasks, the group finally made its way to RAF Tibenham, in Norfolk, England.  After some more training in England, the 445th flew its first combat against German Forces on Dec. 13, 1943, when Stewart’s unit destroyed a U-boat manufacturing plant in Kiel, Germany, and three days later few a mission against German Forces in the Northern Germany city of Bremen. After Stewart and his unit engaged in several more actions, the Hollywood actor-turned American flyer was awarded the Distinguished Flying Cross and the French Croix de Guerre before he was again promoted, to the rank of major.

Stewart’s 12th combat mission was flown on March 22, 1944. It was that day when Stewart led the 2nd Bomb Wing against targets in the very heart of Nazi Germany, the city of Berlin. It was after this mission that Stewart was transferred to RAF Old Buckenham, where he became the group operations officer for the 453rd Bombardment Group, which was equipped with new B-24 bombers.

Though not slotted as a combat pilot anymore, Stewart inspired his airmen by leading several missions from the air himself. Thanks to his capable leadership of the 453rd, Stewart was promoted to the rank of lieutenant colonel on June 3, 1944. Subsequently, Stewart was reassigned to the 2nd Bomb Wing, on July 1, 1944 and made the executive officer of the unit, which was under the command of Brigadier General Edward Timberlake.

During his service with the 445th and 443rd groups, Stewart had flown in 20 sorties against enemy forces.

During the rest of the war, Stewart would serve in several other staff positions until, on March 29, 1945, he was promoted to the rank of full colonel. Less than two months later, Stewart became the commander of the 2nd Bomb Wing. He held the position until June 15, 1945. Thus, Stewart had risen from the rank of private to colonel during World War II.

Following the war, Stewart continued to serve the Army Air Corps in the Reserves until, in 1947, the United States Air Force was created.

During the post-war years, Stewart was the Reserve commander of Dobbins Air Force Base, in Georgia. On July 23, 1959, Stewart was promoted to the rank of brigadier general.  Later, he participated in aerial bombardment missions during the Vietnam War, in the 1960s.

During his exceptional life, Jimmy Stewart’s contributions to film are well-chronicled and familiar to so many. However, his contributions as an American, who did his part during the darkest hours of World War II is less explored by the public. Perhaps even less known is his ongoing commitment to U.S. airpower throughout his lifetime.
Posted by Downtowner at 2:49 PM