My father, then-Corporal James J. Purcell, Sr., was part of the invading force on June 6, 1944, when the Allies under the command of General Dwight D. Eisenhower landed on the Northern Coast of France. His combat engineer outfit was task organized with the 1st Infantry Division during their landing on Omaha Beach. A year before, he lost his brother, Gunner’s Mate Second Class David Purcell at the landing at Anzio beachhead, in Italy. 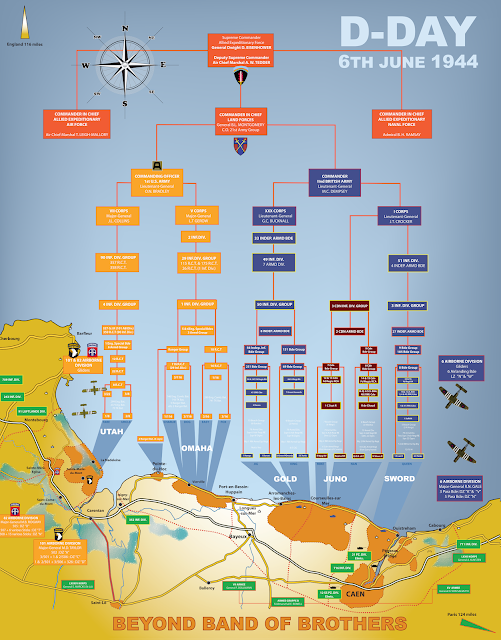 My Dad never really talked about D-Day. Rather, he looked away, took a deep drag from his Marlboro cigarette and just said, “That was a real bad day…a real long one.” And, he had tears in eyes when he recalled it. He was looking past me, past our New Jersey suburban property, back through the long stretch of time. He remembered old pain.

Back when I asked him about D-Day, he said, “It was terrible. So, now I am done talking about it.” Dad crushed out his cigarette on the front porch, folded the Newark Star-Ledger under his arm, and went back into the house and up to my parents’ bedroom. I didn’t see him for the rest of the night. When I saw him again, I got the feeling I shouldn’t ask him about D-Day anymore; or even the rest of the war.

I got it…even when I was nine years old. Dad had a hard time remembering D-Day and Battlefield Europe. He lost friends on the beach, and in later actions. Dad was in the New Jersey Army National Guard when the war started, so he was technically considered Regular Army. This might also be the reason that he didn’t get out until 1946 and was briefly part of the Army of Occupation in Germany.

After that, he started a taxi company in Newark, New Jersey after marrying my Mom, Ruth (nee Ford) Purcell in late 1946. Dad made good, had a nice home and kids. But, he never got over the last part of the war.

On June 6, 1944, Allied Forces landed 160,000 soldiers on a 50-mile swarth of beaches in Normandy, France in a plan codenamed “Overlord.” The German Army had occupied France since November 1942 and the defenses along Normandy were substantial and included large machinegun nests, barbed wire obstacles, beach obstacles, mines and artillery batteries, to name a few.

The “Allies” was a phrase that covered a multitude of armies of nations fighting side-by-side throughout the war. At Normandy, soldier, sailors, marines and airmen from 13 countries were in the fight. Forces from the United States, United Kingdom, Canada and the Free French were prominent among the invasion forces.

The Allies practiced their D-Day roles for months before the actual invasion. In fact, off the coast of Devon, in the United Kingdom, a German torpedo boat killed 749 U.S. soldiers and sailors training on landing exercises for Operation Overlord.
A deception plan was also put in place by the Allies, called “Operation Fortitude.” This operation was aimed at confusing the Germans about when and where the landings would take place. Double-agents, among them Juan Pujol, attempted to divert German intelligence away from Normandy as a likely place for attack.

The English Channel was a major factor in planning for D-Day. It was estimated by the Royal Navy that only 10 days in any given month were suitable for launching Overlord. Another factor in the planning for D-Day was that the Allies needed a full moon for illumination during the crossing from the United Kingdom to the coast of France. Allied airpower had to have the moon’s illumination to navigate the channel.

General Eisenhower, in a June 5 meeting, gave the greenlight for Overlord after he was briefed by Chief Meteorologist Group Captain J.M. Stagg that there would be a brief improvement over the channel on June 6. Meanwhile, Admiral Bertram Ramsay confirmed that conditions would be marginally favorable for a June 6 crossing.

Later, it would turn out that Stagg’s forecast was wrong. As a consequence of that, Allied airpower was limited during the actual invasion and the beaches’ defenses were left virtually intact on Omaha and Juno beachheads.

Throughout the invasion, men and women of the French Resistance coordinated with U.S. Forces to assist them in the liberation of their country. Using code words via radio broadcasts from Great Britain, Allied Forces signaled the impending invasion covertly to their partners on the continent.

D-DAY: THE AIRBORNE GOES IN FIRST

Early in the morning hours of June 6, the American 101st and 82nd Airborne divisions dropped 13,100 U.S. paratroopers by parachute and via glider landings in the vicinity of Cherbourg and Carentan. The mission of these airborne soldiers was to disrupt the German defenses that would be opposing U.S. landings on Utah and Omaha beachheads later in the day.

Meanwhile, between June 5-7, the British 6th Airborne Division deployed 8,500 soldiers by parachute and glider landings in the vicinity of German defensesthat would oppose the British and Canadian forces at Gold, Sword and Juno beachheads. The mission of the British paratroopers was the same as their American counterparts: Disrupt German defenses, create confusion and in so doing assist the landings.

Not everything went to plan, though. Due in part to fierce German anti-aircraft artillery and problematic weather, both American and British paratroopers were frequently dropped far from their planned drop zones. Still, these soldiers started the battle, largely, from wherever they landed and fulfilled their missions.

THE BATTLE ON THE BEACHES

The British 51st Division and 4th Independent Armoured Brigade, as well as the 3rd Infantry Division Group were tasked with securing Sword Beach.

Utah Beach’s landings went fairly well overall. Soldiers from the 4th Infantry Division landed at approximately 0630. By the time they landed, British Bomber Command had destroyed one of two strongpoints opposing the beach.

Initial assault battalions on Utah Beach were quickly reinforced with armor support, along with several combat engineer units (equipped with demolition materials). By 0900, the beach was secured and combat units were moving inland.
Point du Hoc was situated between Utah and Omaha beaches and was assaulted by the 2nd Ranger Battalion.

The Rangers approached their targets by scaling steep cliffs to destroy German guns located on the heights. However, after contending with fierce German and French collaborator fire on the way up, the Rangers discovered the guns had already been uninstalled by the Germans. The Ranger casualties included 135 dead and wounded. Meanwhile, German casualties numbered 50 killed and 40 captured. An unknown number of French collaborators were summarily executed.

The soldiers assaulting Omaha Beach faced the most heavily defended beach of the operation. Water currents were responsible for many landing craft veering off course and being destroyed. Bombers delayed their missions on Omaha Beach for fear of hitting American soldiers. Thus, the defending German units were unscathed when soldiers came from the sea.

In addition, landing craft ended up frequently coming aground 50-100 meters from shore, forcing invaders to swim and wade through water just to begin the fight for the beach. With fire blasting at them from the beach cliffs, casualties were about 2,000 among Americans.

At 0830, follow-on landings were suspended. Destroyers were called on to provide off-shore fire against the Germans. However, to exit the beach American Forces had to move gullies that were heavily defended by Germans. Still, late in the morning, a battalion-sized force had broken out and held the high ground. Even though Americans had broken out, it still took three days for American Forces to pacify their beach entirely.

The Canadian landing on Juno Beach started out with choppy waters. This meant that, while the infantry landed, their armor support was delayed. Consequently, this created a lot of casualties among the invading force (961 men). The Canadians fought hard and made their exits off the beach despite being battered by German defenders. Yet, after finally getting off the beach, soldiers had to clear the towns of Courselles-sur-Mer, St. Aubin-sur-Mer and Bernieres-sur-Mer in house-to-house fighting.

On Sword Beach, British tanks were the first wave ashore and were able to cover the infantry as it was shuttled ashore at about 0730. The beach was heavily mined, so this slowed British progress. British forces contended with German guns and it would not be until several days later than one German observation post was taken. French Forces, assigned with the British, captured a casino stronghold relatively soon after the landings.

At about 1600, the Germans attempted an armored counter-attack against the British Forces on the beach. The German armor units were pulled out to handle Allied attacks in Caen and Bayeux.

Though approximately 160,000 Allied soldiers had landed on contested beaches on June 6, an additional 875,000 Allied soldiers would disembark on those beaches by the end of June. On the first day, the Allies had sustained 10,000 casualties, with 4,414 confirmed as dead.

The Germans had been dealt a crippling blow along the coast, with 4,000-9,000 either wounded, dead or missing.

WHAT THE NEW FRONT MEANT

Since 1942, the Western Allies had been promising a new front in Europe to the heavily besieged Soviet Union. Soviet Allies wanted a second European Front against the Germans because the two fronts would begin the process of squeezing German-occupied lands, forcing a retreat of occupiers back to Germany proper. It is much more difficult to manage a two-front war than a single-front war.

Though American President Franklin Delano Roosevelt wanted to go ahead with a European landing much earlier, it was British Prime Minister Winston Churchill who dissuaded him. It was Churchill’s idea to wait and strengthen Allied Forces and regain strategic strongholds the Germans were occupying in North Africa and Italy.

Even though Normandy was finally decided upon as the landing site, other potential sites were considered in Brittany, the Cotentin Peninsula and at the Pas de Calais.

Following the overwhelming success of the Normandy Invasion, Allied Force, led by Free French Forces finally wrested Paris away from Germany’s grasp by August, signaling a new phase of the war.

The Normandy Invasion can be considered one of the most pivotal victories by the Allies, or in military history for that matter, and led to a string of follow-on victories, which assisted in concluding the wat in favor of the Allies.

Posted by Downtowner at 5:01 PM