Since I was born, more than a half century ago, the notion that UFOs were real would usually draw a smile if not an actual laugh. UFO enthusiasts are considered odd by some, and I am one of those 'some.' Well, I have to swallow some Humble Pie on that one. According to the United States Navy, in a confirmed published report, UFOs are a real thing. And, with that confirmation, it's time for a public conversation. 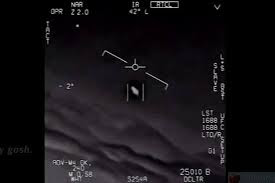 I don't know if the UFO believers are wrong about the whole crashed aliens being kept in a bunker, or if they are right. I only bring it up because if that was our first contact with these UFOs then it's a pretty rotten way to start a relationship. And, whatever these things are, a relationship has begun whether we like it or not.

It strikes me that if aliens (yes, I said 'aliens') wanted a fight then they would have given us one by now. With that said, I think trying to make contact with these beings is a terrible idea. I can only judge things by human standards, so I may or may not be right about this line of thought. And, if a civilization can create aircraft that can travel in space and in our atmosphere then they are more scientifically advanced than anyone in our world. In human history, when more technically and scientifically advanced cultures came into contact with less advanced civilizations it went very bad for the lesser advanced cultures.

Maybe these creatures are better than those of us who are human...I hope so. Who would 'they' contact first? The U.S., the Russians, the Chinese...or some tribe in a rainforest? There is no way to know. This world is woefully unprepared to handle the people born on it. The 'better angels' of humanity are not winning the war for hearts and minds anywhere I am aware of in the world. And...last time I checked....we are a hot minute from nuking ourselves into extinction.

Why would aliens politely introduce themselves to us? People in power everywhere are ruled by greed, paranoia, self-interest and a near-total lack of 'doing the right thing.' On the upside, we also have nuclear weapons and people have additionally created biological and chemical agents to kill each other without so much as batting an eye. Not all people are terrible, but most people participating in any form of government anywhere in the world are. The most celebrated of human traits, like kindness, reason, good humor and fairness, among others, are rarely involved with public service (with notble exceptions, of course).

So what are people generally good at? Well, people are good at making other people angry. I cannot see how that could possibly help us with relating to an alien civilization. Why should people not seek to make contact with aliens? Well, we might actually contact them and I cannot see how that would help anyone. Maybe these aliens are smart enough to know that about people. Perhaps they keep people at a distance because they know how reckless people are.

At some point in the future, it is logical to believe that these flying objects will land and someone will get out: this will create chaos everywhere. Hopefully, one day, people are better and realize that it sends aliens a mixed message when we want to say hello to them, while at the same time preparing to kill other people. Humanity's house is not in order, and it's certainly no time to invite guests over.

I know I sound cynical. I do not know if people can ever be more than what they are now. And now -- aliens? I mean...aliens!? Something is clear, though. People have the capacity to change, some people at least. The idea that visitors from another civilization are, in fact, visiting our planet only makes our collective hyrpocracies and bad actions all the more clear.

Can people change? I hope so.

(Jim Purcell is a retired journalist, a veteran of the U.S. Army, and a former clergyman. He resides with his wife in Western North Carolina.)

Posted by Downtowner at 9:21 PM No comments: